We departed Miami on-time at 2:00pm, although actual departures were a bit back-logged due to the intense rain. By 2:20pm we were in the air. I went to sleep immediately, but woke about an hour later for some dinner. From Seattle to Miami we got nothing on Alaska Airlines, but LAN was a pleasant surprise. We got a blanket, pillow, earphones, hot dinner, and free tv and movies. It was like travelling in the 60s (my recollection being only that which I have seen in movies) with all the frills and being treated like someone important. Even the leg room was excellent, and the chairs reclined more than usual.

According to the flight map we flew right over Panama, but I would never have known it with all the cloud cover. I didn`t see land until we reached the coast of Ecuador, and even then there were huge billowing cumulous clouds reaching nearly 30,000 feet. As we began our decent, rain was evident, but there were definately clear patches as we could see one volcano towering above the clouds. We touched down in Quito on time, at 5:10pm. Getting through customs was remarkably quick, and took less than 5 minutes. We spent close to 15 minutes waiting for our bags, which I was beginning to worry about as they had unloaded three crates and ours wasn't there. Finally, a fourth crate arrived and both our bags were delivered. 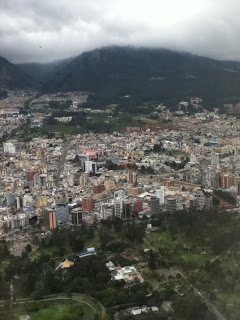 Next stop was the car rental agency, which was very poorly signed, but eventually found outside and across the street from the terminal. The car I had requested was not available, but after going through some options, I ended up with a Toyota Fortuner. We departed the airport at 6:30, and after eventually getting a GPS signal, navigated our way down typical South American city roadways in a series of bumps, swerves, horn-honking, random pedestrians, and our GPS telling us to turn the wrong way down a one-way road. We eventually found our hotel, the Radisson, checked in expeditiously, and began to organize for tomorrow's early morning start. 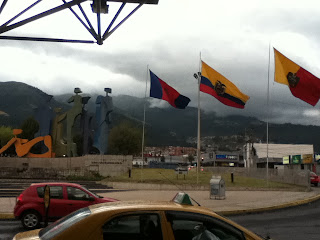 While I personally didn't see any birds in the wee bit of light we had left after our arrival (sunset is at 5:58pm), Joanna did spot a Rufous-collared Sparrow at the terminal while I was renting the car.

Not sure when I`ll be able to make the next post, as I don`t know where we will next have internet. So, until next time, happy birding.
Posted by Michael Preston at 5:32 PM

Birding in Panama
The Birder and Biologist

Lost in Birding
Birding in Ecuador