Our last day in southern Ecuador, and at 5:00am I woke to the sound of heavy rain and strong wind...not exactly the best of birding conditions. By 6:10am we had departed the lodge, with our guide anxiously trying to figure out the best place to go based on weather. Our goal today was to get to about 3,500m elevation, but each time we tried the wind was howling and the rain was falling nearly sideways. At our first site I did manage to get one lifer, a Glowing Puffleg, and between between wiping the rain from my binoculars I was able get brief glimpses of Buff-breasted Mountain-Tanager, Pale-naped Brush-Finch, Golden-crowned Tanager, Pearled Treerunner, and Rainbow-bearded Thornbill. At our second site we found only Brown-bellied Swallow, and at our third site we found Russet-crowned Warbler, Masked Flowerpiercer, Blue-capped Tanager, Grass-green Tanager, Glowing Puffleg, and Slaty-backed Chat-Tyrant.

At 1:15pm we had resigned to the fact that the weather was not going to cooperate, and therefore continued to the town of Loja where we would catch our respective flights home. We arrived in Loja at 3:15pm, with about 30 minutes to spare, so we made one last ditch attempt to do some birding with hopes of seeing Tumbes Sparrow. We had no such luck, and only added to our day-list a Pacific Hornero, Long-tailed Mockingbird, Croaking Ground-Dove, Saffron Finch, Tropical Gnatcatcher, and Fasciated Wren. 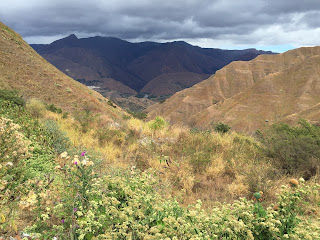 We arrived a the Loja airport at 3:55pm; I boarded my flight at 4:45pm and was airborne by 5:30pm. I then had a lengthy layover in Quito (from 6:25 to 12:15am), connected in Atlanta the next day at 9:00am, connected again in Seattle at 2:55pm, and eventually arrived home in Victoria at 3:30pm. My bag, thanks to airline services, arrived a day later...but at least it arrived. 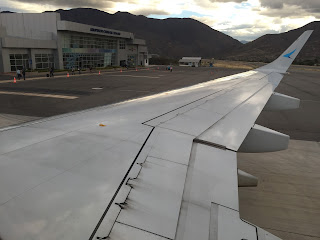 For nearly eight full days of birding in southern Ecuador it certainly was a whirlwind, adventurous tour. With definite peaks and valleys in daily tallies, some long drives over rough roads, and bouts of bad luck with a flat tire and bad weather, we actually did quite well. My trip tally was 321 species, of which 77 were lifers.
Posted by Michael Preston at 9:31 AM

Today's birding was destined to be an improvement over yesterday's, and so at 6:05 am we all met in the breakfast room of the Tapichalaca Lodge with refreshed hope. Following breakfast we began our birding along the primary trail just behind the lodge. The weather was mixed, with scattered showers off-and-on through much of the morning. Our firs bird of the day was Rufous Wren, which was followed shortly after by a Rufous-crowned Tody-Flycatcher and a White-banded Tyrannulet. We then encountered a small flock of Ashy-throated Chlorospingus, Capped Conebill, and Pearled Treerunner. My first lifer of the day was Citrine Warbler, which ended up being a relatively common bird in this area. We continued to work our way along the trail to the "antpitta station", where our goal bird here was the Jocotoco Antpitta. Further along the trail we aded Buff-breasted Mountain-Tanager, Black-capped Hemispingus, Rufous-chested Tanager, Rufous-breasted Chat-Tyrant, Gray-hooded Bush-Tanager, and Streaked Tuftedcheek. Upon arriving at the antpitta station, it seemed a tad anticlimactic to find one bird just sitting along side the trail waiting for its breakfast. We all took a seat under the small shelter to get out of the rain, and spent then spent the next 20 minutes or so watching one juvenile and one adult Jocotoco Antpitta eat their complimentary worm breakfast. 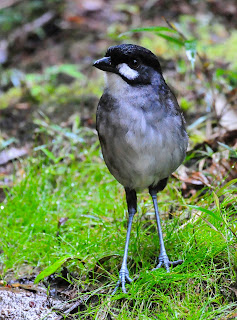 Jocotoco Antpitta coming to the worm-feeding station at Tapichalaca 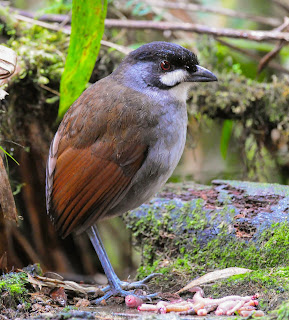 Before leaving the feeding station we tallied a few other birds in the vicinity, including Turquoise Jay, Scaly-naped Parrot, Hooded Mountain-Tanager, Grass-green Tanager, White-throated Quail-Dove, and Yellow-bellied Chat-Tyrant. Upon departing the feeding station the weather broke and the rain subsided. Subsequently, the bird activity picked up and we proceeded to add some good species, the first of which was a Chusquea Tapaculo (lifer). Soon after the tapaculo we added Orange-banded Flycatcher (lifer) and White-throated Hawk (lifer), Tyrian Metaltail, and Lacrimose Mountain-Tanager.

We arrived back at the lodge for lunch about half-hour early, and therefore spent some time birding around the feeders. Here we added Amethyst-throated Sunangel (lifer), Chestnut-breasted Coronet, Collared Inca, Flame-throated Sunangel (lifer), Long-tailed Sylph, Rufous-collared Sparrow, Speckled Hummingbird, and Fawn-breasted Brilliant. From noon to nearly 1:30pm we had lunch and took a short break.

At about 1:30pm we drove to the small village of Zumba, located about 30 minutes from the lodge and south toward the Peruvian border. We spent about two and a quarter hours birding among the crop fields, nut trees, fragmented forest, and river bank adding some good birds. Our first tick here was White-capped Dipper, followed by Olivaceous Siskin, Dull-colored Grassquit (lifer), Back-billed Thrush, Silvery Tanager, and Common Tody-Flycatcher. We also found Lafresnaye's Piculet, Sierran Elaenia, Maranon Thrush (lifer), Blue-necked Tanager, and three of Simon's most despised bird, the Bananaquit. Continuing along I didn't add other lifers, but did see some good birds such Ash-browed Spinetail, Bronzy Inca, Silver-beaked Tanager, White-lined Tanager, and Golden-olive Woodpecker.

For the remainder of the day (4:15-6:00pm) we did a bit more birding around the lodge. However, it was very slow going and we added no new species for the day. However, just as it was about too dark to see and we were about to head inside for dinner, an Undulated Antpitta (lifer) was found walking along one of the trails. We all got great looks, and it was a nice way to end the day.
Posted by Michael Preston at 8:20 AM

Birding in Panama
The Birder and Biologist

Lost in Birding
Birding in Ecuador